CTCI Foundation was established on October 12, 1959. As a pioneer of new technologies, CTCI Foundation commits itself to developing technological talents for Taiwan and thereby facilitates Taiwan’s economic development and assists Taiwan’s manufacturing industries to upgrade their productivity. In 1962, the Engineering Education Research Fund was raised to award scholarships to distinguished undergraduate and graduate students.

Until 2019, the scholarships had been awarded nearly 4,000 students. In response to the 60th anniversary of CTCI Foundation, 2,624 winners have been contacted, of which 21% have entered universities for research, 18% have become professors, and more than 57% have entered industries. Moreover, 934 scholarship winners were middle or senior executives, who had brought outstanding influence to Taiwan's technological progress and industrial development.

A publication of the personal feedback from previous scholarship winners was published in this year. Their career stories are not only published in "CTCI quarterly" but also on the website for visitors to browse in the future. CTCI Foundation will uphold the purpose of "cultivating scientific and technological talents" and hope to make greater contributions to the sustainable development of Taiwan.

In order to comply with the new technology and higher education extensions, since 2007, the CTCI Foundation Science and Technology Scholarship had been adjusted and awarded, focusing on areas such as “Environment, Energy, Materials, Chemistry, Electromechanics, and Information” listed in Article 2 of the CTCI Foundation’s Donor Statutes. The “Research Scholarship” is issued for students from grade 2 or above in the relevant Ph.D. From 2007 to 2019, the number of departments that can apply for scholarship has increased from 46 in 6 universities to 100 in 8 universities, and each department can recommend one student to participate in this award. So far, there have been 471 applications, 229 winners. The number of winners and applications for research scholarship in twelve years is shown in Figure 1.

In order to encourage green innovation and R&D with market value, since 2010, individual groups of “Innovation Scholarship” have been set up for third grade (inclusive) or above, and master students from colleges and universities recognized by the Ministry of Education, encouraging students with the potential for technological creativity; and from 2011, “Innovation Scholarship” have added additional team groups to stimulate the creative momentum of the brainstorming of student groups. Since its establishment in 2010, a total of 135 individuals and 110 teams have applied for and 57 individuals and 59 teams have won. The number of applicants and winners is shown in Figure 2. (Innovation Scholarship application was not open in 2019.) 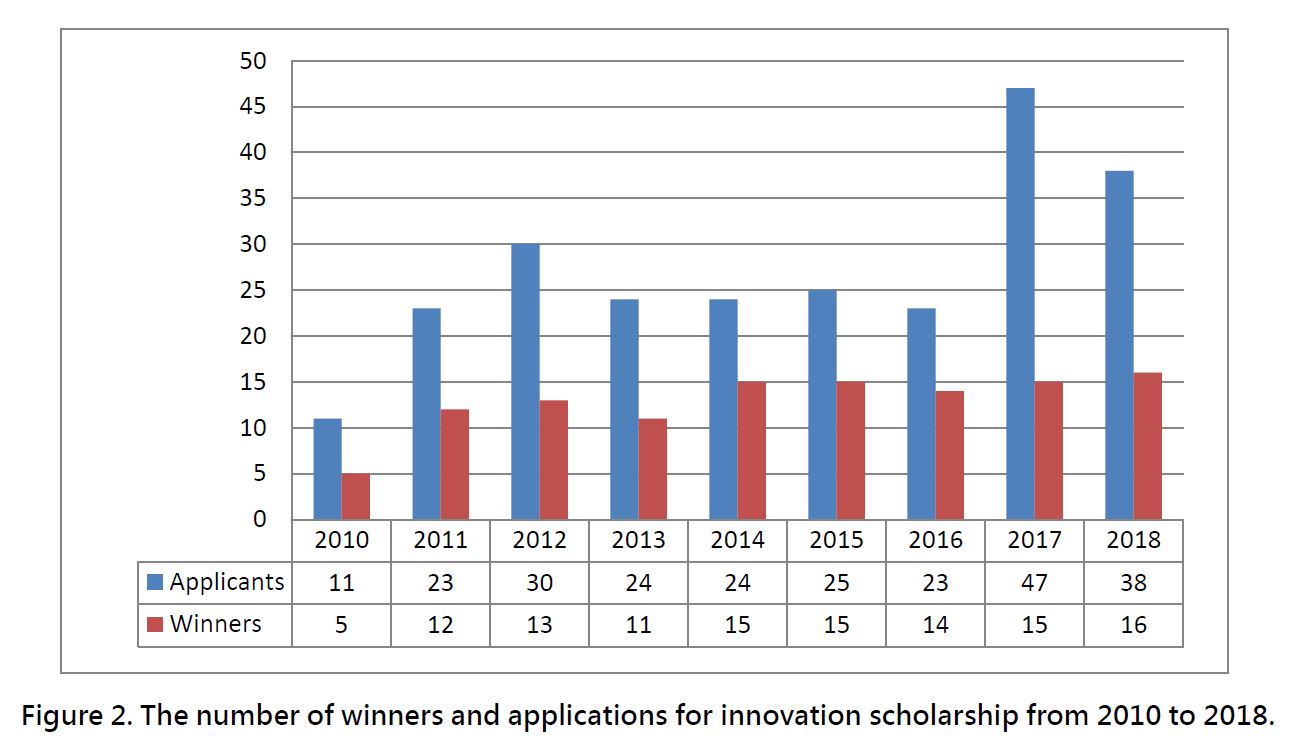 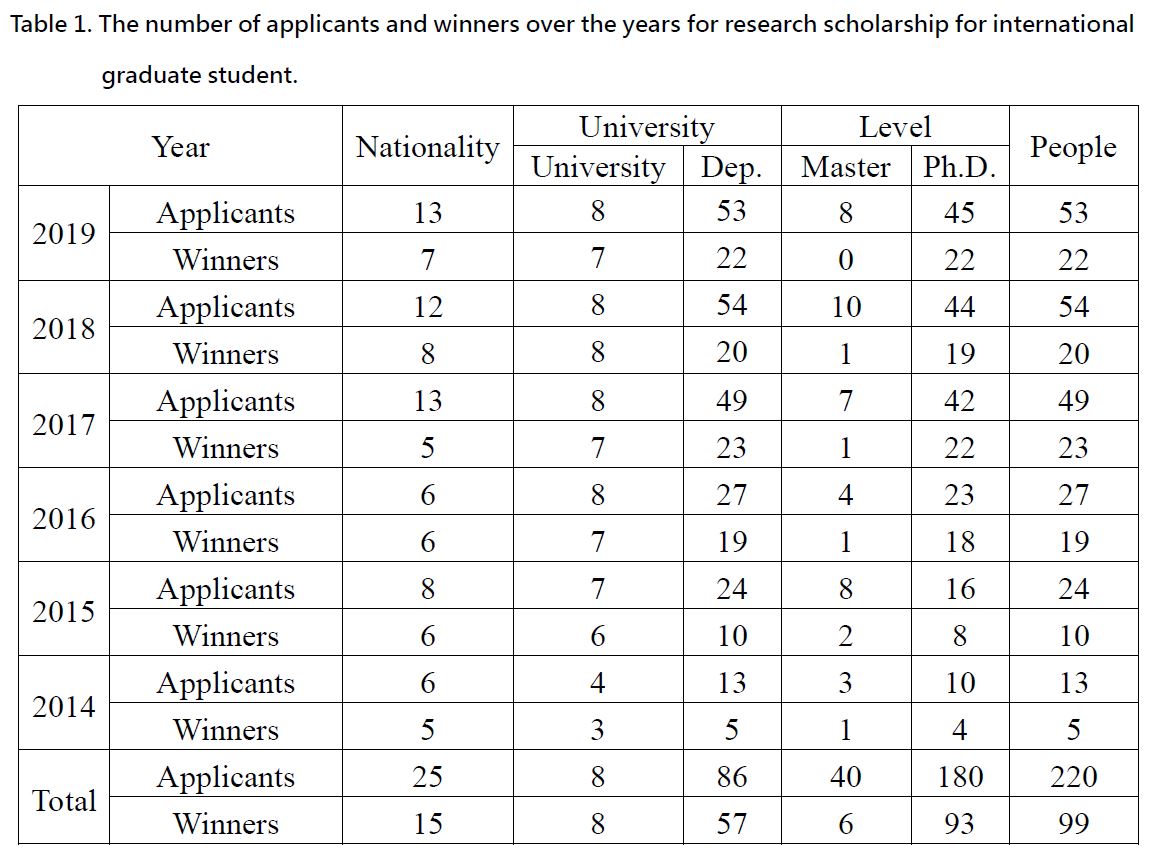 Especially, 2016 “Research Scholarship for International Graduate Student” winner, doctoral student Ramesh Perumal, who from Indian, and studied in department of Electrical Engineering of Tsinghua University, accepted award by Former Vice President Vincent Siew at the awards ceremony. After that, he accepted interview with two media of Tamil Nadu, South India and was published in the newspaper. The news clips are shown in Figure 3. The details of the number of applicants and winners over the years are shown in Table 1. 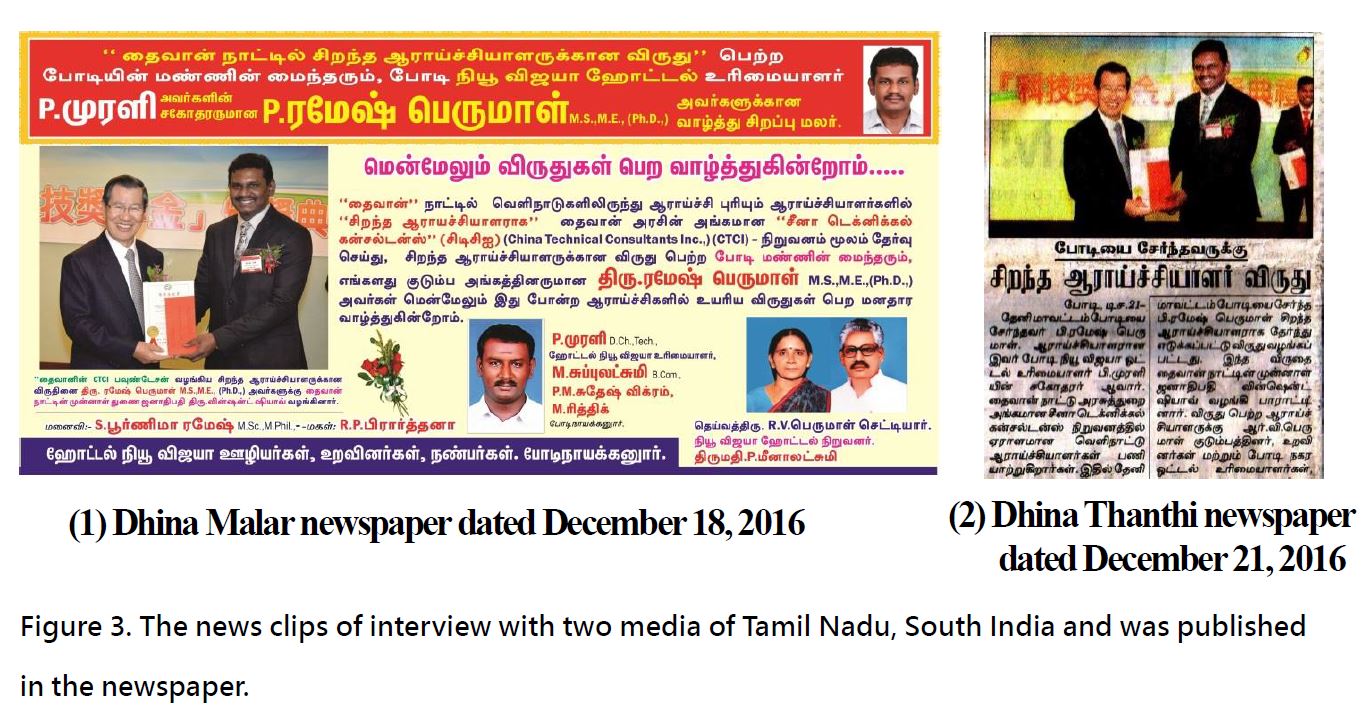 In order to allow outstanding international graduate students who are studying masters or Ph.D. in Taiwan and need financial assistance to concentrate on their studies. In 2016, they can apply living grants when applying research scholarships for international graduate students, and since 2017, the living grant can be independently applied. The currently number of accepted applications is 100 departments from 8 universities, including Taiwan University, etc., each department can recommend one student to participate in this grant, a total number of applicants have 163 international students from 8 schools, 22 countries, and 61 international students from 8 schools, 16 countries win in four years. The details of the number of applicants and winners over the years are shown in Table 2. 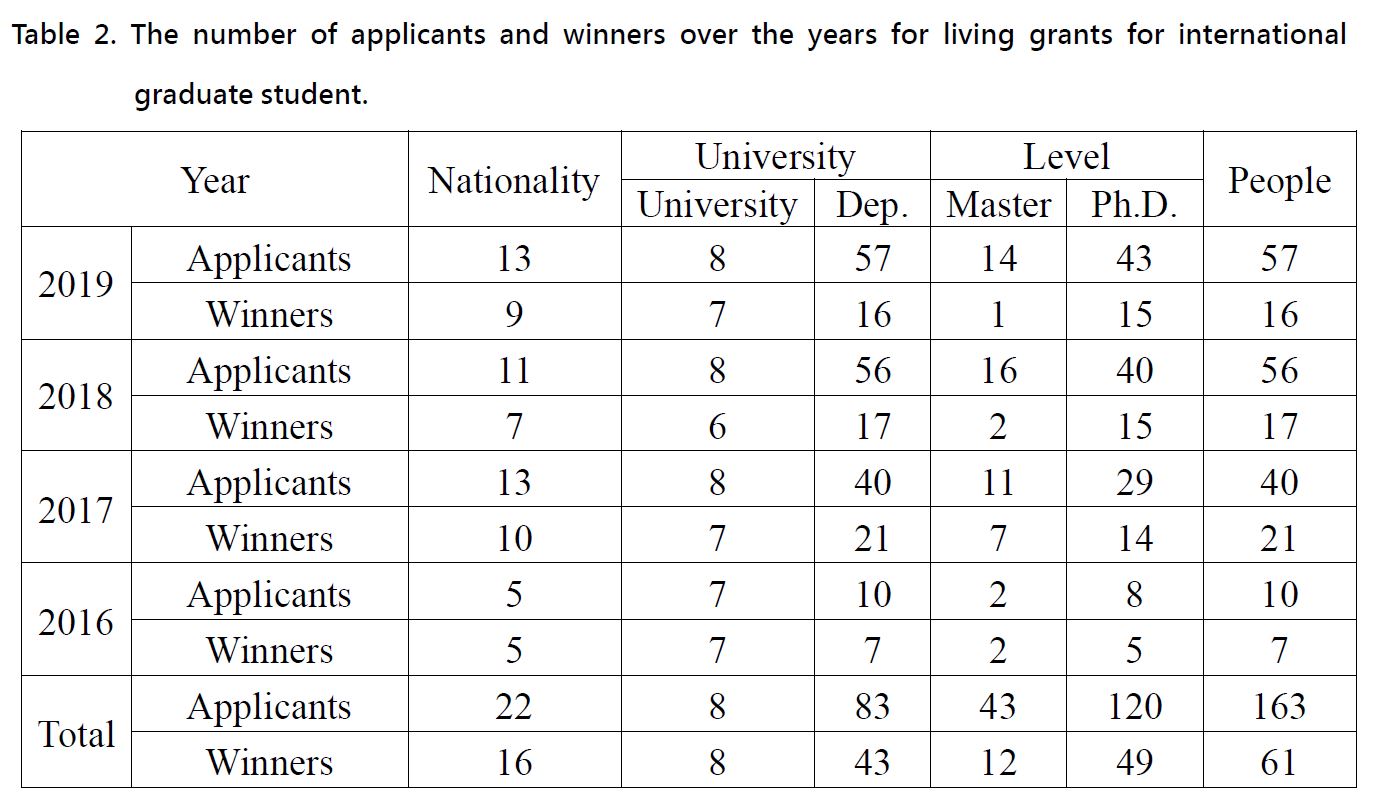 The Application Progress of 2020 CTCI Foundation Science and Technology Scholarship